Infinite Fall has announced that their upcoming video game, Night in the Woods, will be releasing on the PlayStation 4. This comes as a result of their Kickstarter campaign being funded last year. If you’re looking for a video game that deals with a in-depth story with exploration and adventure, you may want to give Night in The Woods a try.

Scott Benson, Animator for the video game, has took to the PlayStation Blog to further explain just what Night in The Woods is all about.

“Night In The Woods is an adventure/exploration game with a heavy focus on story, character, and place. You’ll be doing some running and jumping around, a lot of extracurricular activities, some bass playing, some smashing of things, and a lot of hanging out with your townie friends.

Night In The Woods takes place in the crumbling town of Possum Springs, a dead-end backwater that is barely holding on after the mining jobs left. Mae the cat is a college dropout who has returned home to reclaim her teenage life with her friends who stayed in town. Bea stayed home from college to take over the family business after a death sent her family into a tailspin. Gregg and Angus are highschool sweethearts, working hard to get out of Possum Springs. Germ is a weird kid that hangs around. No one knows what his deal is.
What Mae finds, however, is that life and her friends moved on while she was away. Strange things are happening to her and to the town. Things are changing. And there’s something in the woods up behind the park that might mean an end to all of it.”

So far there has been no word as to when the video game will be released. But for now, check out the trailer below. 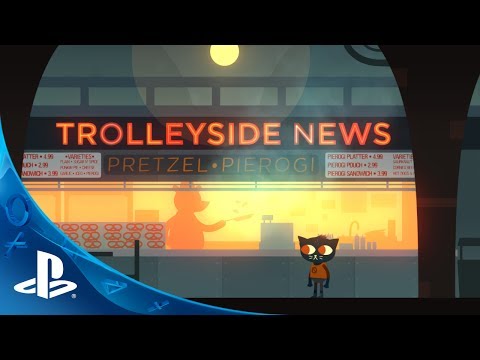