Scot Amos, executive producer of Crystal Dynamics revealed the first trailer for their upcoming Lara Croft and the Temple of Osiris.

Scot Amos had this to say about Lara Croft and the Temple of Osiris through the PlayStation Blog.

The story takes place in the forsaken Temple of Osiris, long hidden, deep in the deserts of Egypt. Lara Croft arrives at the mysterious temple, only to discover her new rival, Carter Bell, is also seeking the legendary Staff of Osiris – an instrument of power over life and death. When Carter removes the mythical Staff from its resting place he triggers a trap that curses them both and unleashes the evil god Set, brother to Osiris, and usurper of his kingdom. However, the reclaimed staff also awakens the gods Horus and Isis, the son and wife of Osiris. Free from their ancient prison, these gods offer to repay Lara and Carter by joining forces in order to remove their curse and stop Set. You’ll play as Lara, Carter, Isis, or Horus as you fight your way across lethal sands and through deadly tombs battling to resurrect Osiris and fulfill his prophecy by defeating Set.

Lara Croft and the Temple of Osiris features everything you loved about Guardian of Light, including the fast paced action, isometric and cinematic camera, dangerous puzzles, deep tomb exploration, lethal traps, and more. Then, leveraging our next-gen engine and the power of the PlayStation 4, we deliver truly stunning environments and visual effects as well as four-player co-op action. You can see the incredible attention to detail and the passion the Crystal team pours into every facet, effect, and texture – pushing the art of digital games. The team here is working tirelessly to deliver that AAA experience in a classic arcade Croft title.

Lara Croft and the Temple of Osiris doesn’t have a release date as of yet but the game will be available on PlayStation 4, Xbox One and PC. Be sure to stay tune here at PSG for the latest news happening at E3 2014! 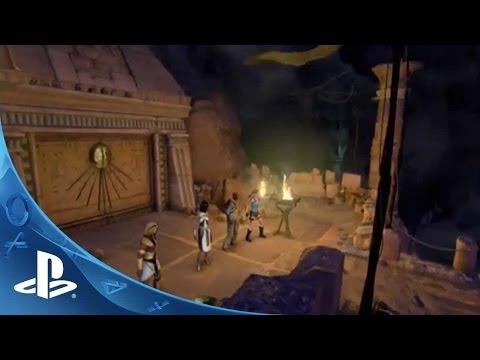