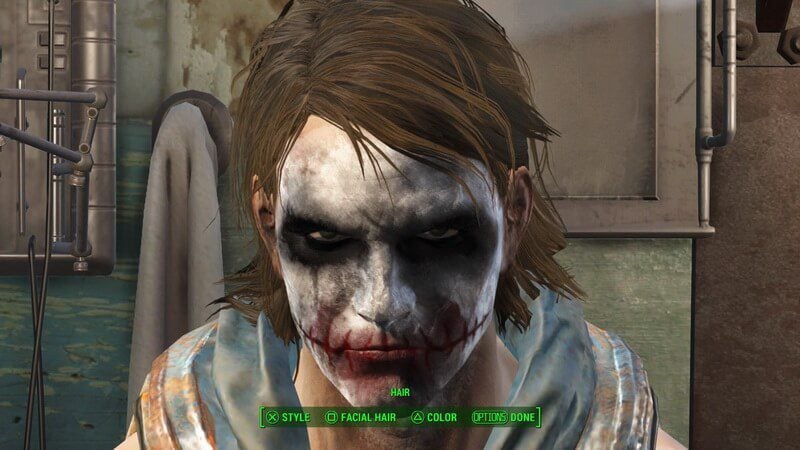 Fallout 4 is one of the most customisable role playing games I’ve played in a long time, the weapons, armor and cosmetic varieties are definitely impressive. In the game you can find extra customisable options than just in the character creator and I’m here to tell you how to find them.

The character creation tool in Fallout 4 is pretty great, though this isn’t the be all and end all of your characters looks. Upon leaving the vault you can find unique cosmetic items through vendors and magazines which can add new types of scarring, tattoos and other features to further enhance the look of your hero.

In Diamond City, next door to Doctor Sun’s outdoor office you can find a surgeon by the name of Doc Crocker in the Mega Surgery Centre. As well as access to the original character creation tools, Doc Crocker also gets you access to face paints, grime and tattoos, surprisingly there’s a decent amount of options.

You can add several different layers of both the grime and the face paint which gives some pretty interesting results, some can look disturbingly hilarious while others can give you that badass look your character just needed. You can even go full Joker with the face paints like in the image below.

All the grime and dirt options can reflect your treks out in the wasteland with grit, dirt, blood splatters that really show how deadly you are. It’s fun to have a play about with, using the layers you can come up with clever combinations of paints and dirt.

There a five issues of Taboo Tattoos to be found about in the wastes, which unlock 5 face tattoos and a neck tattoo for your character to have on show. Once found just head back to the surgery in Diamond City to apply them.

So where do you find the tattoo’s?

The first one is simple. Head to Thicket Excavations, a quarry directly east of the Red Rocket Truck Stop, pretty close to where you start the game. At the quarry, on the southern edge of the pit, there are three small trailers. In the trailer closest to the pit, it’s on the desk inside. From this mag you’ll get a pretty sweet nautical anchor.

The Eagle is a pretty neat neck tattoo. You’ll find it in Concord, on the main-street, look for a red truck. Behind the truck is an alleyway, and down the alley is a cellar door marked Concord Civic Access. Inside, at the bottom of the stairs you’ll pass a small room, next to a steamer trunk you’ll find the magazine.

The lucky clover is the only cheek tattoo. Head to Mass Pike Tunnel East, and head there with a heavy weapon and brace yourself because dear God it’s a tough joint. Once you’re underground, head into the southern tunnels. When you spot a small room with a power armor station, look around for a couple skeletons. Next to one, along with some junk on the floor, you’ll find the issue of Taboo Tattoos.

The next tattoo featuring a radiation symbol with a skull in the center is a forehead tattoo that can be acquired at the Irish Pride Industries Shipyard, which is due north of Bunker Hill. There’s a ship inside the main building, within it there’s a metal lunch table with a lit lantern sitting on top. The magazine is right there next to it. Congratulations, you’ve got yourself a nice radiation symbol tattoo.

Last but not least you’ll find the bad luck horseshoe tattoo in Vault 81, which is west of Diamond City. Look for a barbershop on the lower floor, it’s marked with a sign. The magazine is on a small table inside. While you’re there, you can also get a haircut.

Just along the way from the surgery is the barber shop. For a measley 15 caps he’ll sort you out with a flashy new hairstyle, interestingly the shop has more options than the character selection offers, however this is expected since the surgeon can offer new varieties of facial features. Another barber can be found in Vault 81, to access the vault you’ll need at least 3 fusion cores.

What John doesn’t tell you is that there is extra hairstyles that can be found throughout the wastes when you stumble upon two separate copies of the magazine Le Coiffe.

The first can be found in the Charlestown Laundry, just southeast of Bunker Hill, the laundromat is a tough building to find, but can be defined by a couple of laundry shop-style signs. You’ll find the copy of Le Coiffe in a basket sitting on top of one of the washing machines. It grants you access to a lovely, towering beehive called The Hornet’s Nest.

The second Le Coiffe magazine is found at Fallon’s Department store if you head south from Diamond City you’ll eventually come across a three-story building with a big Fallon’s sign on it. The issue of Le Coiffe is on a round table in the smallest room on the top floor.

There are other things in other rooms, so I’d bring a weapon or two of some sort, and a big one. The hairstyle from this mag is a throwback to Fallout 3, named Megaton this hairstyle will keep you thinking of the ‘Old Days’. Here’s the location (Below).

To get access to these new hairstyles just pop to the nearest barber once you have collected the magazines.

As always, if you’re on PC and lack the patience to spend the time searching for each of these magazines and just want to change style on the fly you can! Just input some simple console commands and the choice is all yours.

* Find a chair in a quiet well-lit area, preferably somewhere outside in the sun. I’d suggest placing the chair out the way of NPC’s too just in case they get the way.

* Sit in a chair, switch to third-person view, and turn the camera so you’re looking directly at your character’s face from as close as you can get without entering back into first-person mode. (This is pretty crucial as your character will still be doing its idle animations during the changes).

* Save your game. You may make changes and realize you don’t like them.

* Type the following, without the quotation marks: ‘showlooksmenu player 1’ and press enter. Hit the tilde key again to close the console.

If all has gone well then you should be able to customise your character just like before the Vault! However not all the hairstyles and tattoos will be available unless you’ve got around to collecting the magazines.

Now, more cheating. Like I said, you don’t have to find the magazines at all if that’s not your style. Do not read the below details if you want to be a real gamer and earn your rewards but just in case you’ve already completed most of the game don’t feel the urge to go tattoo hunting, by all means, do so.

Just Open the console by pressing ~. Type (with no quotes) ‘coc qasmoke’ and press enter.

First off be careful, you’ll be transported to a dark room and in this room is a copy of all the items in the game in footlockers. In one of the footlockers is all the books in the game, grab the ones you need (Taboo Tattoos and Le Coiffe).

Once you’ve grabbed what you need you’re done. BOOM you have all the hairstyles and tattoos in the game, but now you’re stuck. Don’t worry I’ve got a solution to that too.

Open the console the command with ~ then type ‘coc sanctuaryext’ and press enter.

You’ll be teleported back to Sanctuary with anything you’ve taken from the room, but it was just the hairstyles and tattoo’s. Right?