The Assassin’s Creed videogame series is known to feature some of the coolest and most iconic videogame weapons and equipment we’ve used to date. However, even when we’re spoilt for choice, the series two most popular weapons are undoubtedly the hidden blade and rope launcher.

The hidden blade is…well a blade hidden inside your shirt sleeve with which you can assassinate any unsuspecting victim with just a click of a button and few swift strokes. The rope launcher allows you to shoot out a rope to great distances and tie it to objects, allowing you to climb to previously inaccessible locations.

Although, they look rather cool in the Assassin’s Creed world not many would have thought they can become usable in real life or serve any purpose. A Youtuber just proved those critics wrong since he’s built his very own and functioning versions of both the devices.

Although they don’t look as appealing as their videogame counterparts but they sure work and are awesome once you get to the point where they’re being used. The guy actually climbs up using the rope launcher which is really cool.

Although, it’s obvious he doesn’t go about murdering people with the hidden blade (a pity), it also works and is very much capable of doing lethal damage to anyone and everyone. Check out the videos below which show these awesome gadgets in action. 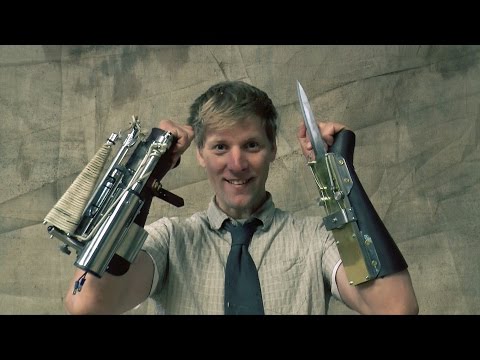